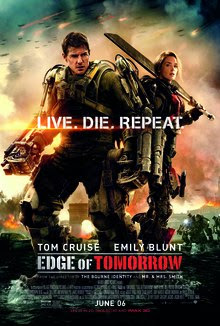 Without any preconceived notions I went ahead and watched "Edge of Tomorrow." I must say I was pleasantly surprised. If I had to describe it I would have to say it was a mash-up of "Groundhog Day" and "Starship Troopers" with a definite video game feel to it. Fight..die..reset, going back to the beginning and use what you've learned to get further than you did last time.

Now I have to preface this by saying that I'm not really a big fan of Cruise, but the main character Cage (played by Cruise) is what won me over to this movie. Cage starts out as pretty much of a complete a**hole. This might not be what you think turns you on to a movie, but take away all the aliens and CGI and this turns out to be a pretty straightforward redemption story. It's a solid story, told well, and the thing about it is, Cage has to really work for his redemption.  I mean really work for it, so by the end of the movie it’s very clear he’s grown and learned and come out of this a completely, believably changed person.

I loved this because it isn't often Hollywood give us such flawed heroes. I’m not talking about the “bad boy with a heart of gold” kind of character that usually gets passed off as a flawed hero, I’m talking the “jerk who gets his head bit off first in a Jurassic Park movie” kind of character. With such a difficult road to redemption, and whatever else happens throughout the film, whatever other flaws I could point to, that, for me, made it worthwhile.

Let's not forget about Emily Blunt either, the kick-ass heroine  who happens to be the poster girl for the war against the aliens.  She's not just there as a prize for the hero.  Or if she is, it’s really ambiguous. She stands up on her own merits, which is a nice change of pace for a summer film, or any film for that matter.

I've also got to say that I thought Bill Paxton was absolutely hilarious as Master Sgt. Farrel. He's certainly come a long way from Pvt. Hudson, but is no less amusing.

So overall a recommendation to see this summer.
Posted by Al H. at 6:29 PM No comments:

5e Free PDF is Out

I really didn't take the time to read all of it, just skimmed through parts.

I'm still mulling it over. If pressed, I'd say I'm underwhelmed, but then my bias for 1ed should not be news to anyone here. I don't think it's a bad game -- the presentation alone makes it seem both simpler and quicker to dive into than anything D&D has been in too long a time. But it didn't spark a feeling of "I have to play this, and soon." This one doesn't appear, to me at least, to have much of a personality. It's very smooth, very straightforward, a homogenized mash up of 4ed & 1ed, but leaning towards very high survivability, very high attributes, and very high power level compared to 1ed. The one thing that stood out for me was that you can mostly set up and level a character without ever having to roll a single die.

As I said my overall impressions is, meh.
Posted by Al H. at 8:42 PM No comments: