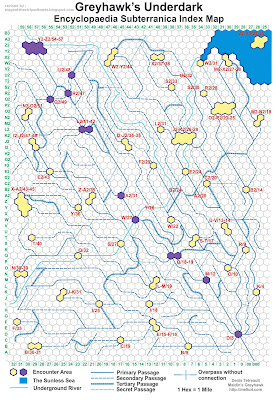 Since the last Underdark update the party has been exploring the lower third of the map. Actually more accurately party B has been exploring the Underdark while party A has been travelling the surface world clearing the Gray Plague from the land. Most of the player's had 2 PCs for a while there and since they're getting pretty high level [in the low to mid-teens] the group decided to split the party into Group A and Group B so that they weren't waltzing so easily through encounters and also partially to avoid having to split up XP so many ways. 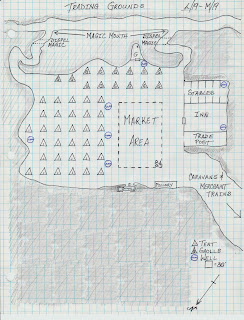 As mentioned in my previous post I've been using much of the material from the Dragonsfoot Collaborative Project: Mapping the Depths of the Earth. As happens much of the time the players decided to go where you haven't prepared fully ahead of time. Wouldn't you know it the party decided to go to the trading grounds [L/19 M/19 on the Underdark map] which has no associated map. So I put together a quick map from the description for the PCs on the spot. This is the PC version only, the DM version has the manor and the rest at the bottom of the map behind the locked gate. I edited that portion out because the players do look at the blog posts occasionally. This way they're not tempted to look at what they haven't seen/explored yet. I'm finding the whole Encyclopedia Subterranica from this project to be of tremendous help and a great time saver in getting the various locations fleshed out for exploration. I would recommend it highly for anyone running the D series modules or any other Underdark adventure.
Posted by Al H. at 1:45 AM No comments: 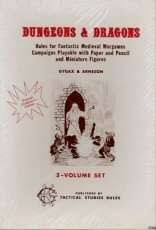 For those who might be interested and haven't yet heard, over at DriveThruRPG/RPGNow the original Dungeons & Dragons (0e) Boxed Set (White Box version) is available in PDF format. Again. Now they just need to come out with the supplements.

Blurb from the product page.
"First published in January 1974, the original edition rules of Dungeons & Dragons would go on to see six different printings. This edition is for the Original Collector's Edition released By Wizards of the Coast in 2013, which was itself a revision of the 6th and final printing, the "Original Collector’s Edition" or white box edition.  You get all three books contained in the original boxed set: Men & Magic, Monsters & Treasure, and Underworld & Wilderness Adventures plus the Reference Sheets booklet. Great to read and still great to play, the original edition shows you where the roleplaying hobby began and the original version of the game that spawned a hobby."

The covers are the re-release covers not the original artwork pictured. If you had previously purchased the PDFs, prior to their removal years back, you can download the new version gratis. Get them right over here.


If you're hankering for a classic science-fiction game instead, then Jim Ward's original TSR 1st Edition of Metamorphosis Alpha should fit the bill quite nicely.


Edit
On the heels of the Original Dungeons & Dragons Boxed set releasing in PDF we now have Supplement I: Greyhawk in PDF form for $4.99. It's only a matter of time before the rest get released, I suppose.

Edit #2
So they're coming out in dribs and drabs. The Blackmoor supplement was just released.

Edit#4
The Gods, Demi-gods & Heroes PDF is now available at dmsguild.com (formerly dndclassics.com).
NB the Hyborian and Melnibonean mythos found in the original booklet have been removed.﻿
Posted by Al H. at 8:28 AM No comments:

Five Planets at Once

Stargazers, you’re in for a treat. From Jan. 20 to Feb. 20, people around the world who wake up just before dawn will be able to see five planets. FIVE! (BuzzFeed News) 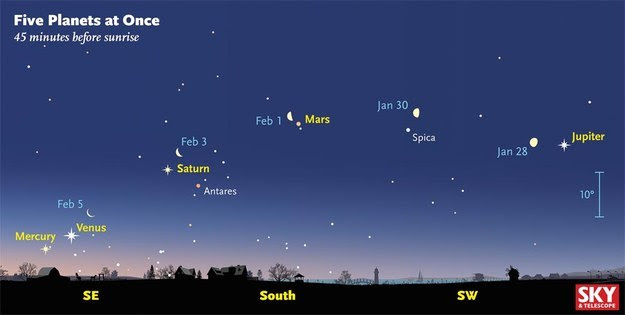 Here’s what the sky should look like. To see this, you’ll have to set your alarm really early. Like an hour before sunrise. Sky and Telescope Magazine
Posted by Al H. at 11:45 AM No comments:

I enjoy all of the cartoon adventure walk through's drawn by Jason Thompson. They are overall endearing, pretty amusing, and quite often uncannily accurate as to what happens in one of the depicted adventures. I'd love to hang 'em all on my wall.

The latest release is the classic AD&D 1ed Vault of the Drow from the bygone days. Below is the lo-res version. Go to the WotC link for the larger, hi-res version.


In an odd bit of serendipity, the FtF group is just now finishing up D2 and getting ready to go on to explore D3. That is, after they take care of the grey plague ravaging the land as a result of Lareth's machinations.
Posted by Al H. at 12:46 PM No comments:

Bowie Through the Years

David Bowie through his many incarnations.