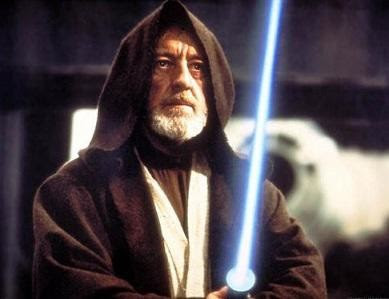 "The struggle of humanity against power is the struggle of memory against forgetting."
...
-- MILAN KUNDERA
......
With regards to Law and Chaos, you are Neutral

With regards to Good and Evil, you are Good

Neutral Good people are practical romantics. Which might sound like a contradiction in terms, and maybe it is. They don't care though. They know the world doesn't always make sense, and that you can't put all your faith in cut-&-dried definitions. A Neutral Good person generally takes the moderate position. Both security (order) and liberty (chaos) can be good things, but one isn't necessarily better than another. In some situations the law brings the most benefit, in other cases personal freedom is more desirable. It's all relative. Order and chaos are just theoretical constructs. They are means to an end, not ends in themselves. The greater good is just that : whatever brings the greatest amount of actual good to the world. People get too hung up on definitions. Many people believe "good" has a single concrete meaning, and anyone that disagrees with their interpretation is the bad guy. Good people fight each other over different shades of meaning, never understanding that the other guy is not all that different from them. Neutral Good seeks to avoid this, knowing that a real understanding of the world is only achieved by respecting human life, keeping an open mind, and seeking Truth in all things. In the words of Socrates, "There is only one good -- knowledge. And one evil -- ignorance."

Neutral Good is "absolute goodness." It is the purest of the good alignments, the one most concerned with bringing peace, prosperity, and happiness to the world. Being pure good, it understands pure evil better than anyone. Mankind has an almost limitless capacity for self-deception -- in the right circumstances, people will believe anything. Evil individuals or groups will try to cloud your understanding of truth and replace it with their own agenda, until eventually you believe that war is peace or two plus two equals five. Once you can no longer think objectively, they've got you where they want you. Evil's best chance of defeating good is by making people forget that good even exists ... by making them forget they have a choice. The struggle of humanity against oppression and domination can only be won by remembering what humanity actually is. To this end, Neutral Good opposes the manipulation and control of innocent people in any way, striving for an egalitarian Utopia where nobody can take advantage of anyone else. A nice idea in theory, although it'll probably never happen. Just further proof of the unrealistic incompetence that defines the good alignments in general. Unfortunately, the people who would do the most good in positions of power are often the people least capable of achieving power in the first place. And vice-versa.

Your Destination in the Afterlife : ELYSIUM

According to Gygax, your soul is going to Elysium. This was the "Heaven" of the ancient Greeks, the Golden Country in the eternal west where the sun never sets. Most souls in ancient Greece simply went to the Land of the Dead, a grey and gloomy place of perpetual twilight. Only the purest and most noble souls could reach Elysium. To give you an idea, it was probably something along the lines of the Roman Afterlife in the movie "Gladiator" ... the blue skies and warm winds and endless fields of grain. In this place, you've come home.

In the AD&D universe, Elysium has four levels and lies between Paradise and The Happy Hunting Grounds. Gygax placed this plane in the very center of the higher planes, at the zenith of the sky. This is the highest plane of all, the best of the best. Congratulations. Or since it's Greek, maybe I should say kudos.
And may The Force be with you, always.  ;-)


As most of you should already know Issue 8: Urban Adventures of & Magazine has been published. Click the caption below to download it.


And the best part is the price - Free. So go get your copy.

Everybody is familiar with  the iconic Star Wars poster - x-wings, light sabres, the Death Star, Luke, Princess Leia, and Darth looming in the background. Below are some movie posters not everyone has seen.

The very first Star Wars poster by Brothers Hildebrandt, 1976, before the film was introduced

The Empire Strikes Back, Hong Kong, 1980

The Empire Strikes Back, France, 1980

The Empire Strikes Back, Turkey, 1980

The Empire Strikes Back, Hong Kong, 1980

The Empire Strikes Back, Germany, 1980

(via The Star Wars Trilogy)

The Empire Strikes Back, Romania, 1981

The Empire Strikes Back, Hungary, 1982, by Tibor Helényi

Return of the Jedi, Hungary, 1984, by Tibor Helényi

This is an update to the Griffithton Village map I posted a while back. The mage (Branton) has been slowly amassing his fortune and spending it to upgrade the original plans to his wizard tower. He has also been steadily gathering the contents for a full lab and library, as well. Since he has apprenticed himself to Crus who's speciality is the Underdark he has also added a secret tunnel entrance to these dark depths. The tunnel is currently collapsed by the dwarves working on the construction of the tower, since he doesn't want any unexpected guests showing up until he can provide the appropriate welcoming committee. Granted he (Branton) is still a couple of levels away from name level where he would be eligible for his own tower, but you have to remember it's still under construction and since the party is ready to start exploring the elemental nodes in the ToEE that day is not so far away. Anyway, below is the updated plan for the (new) Wizard Tower in Griffithton. 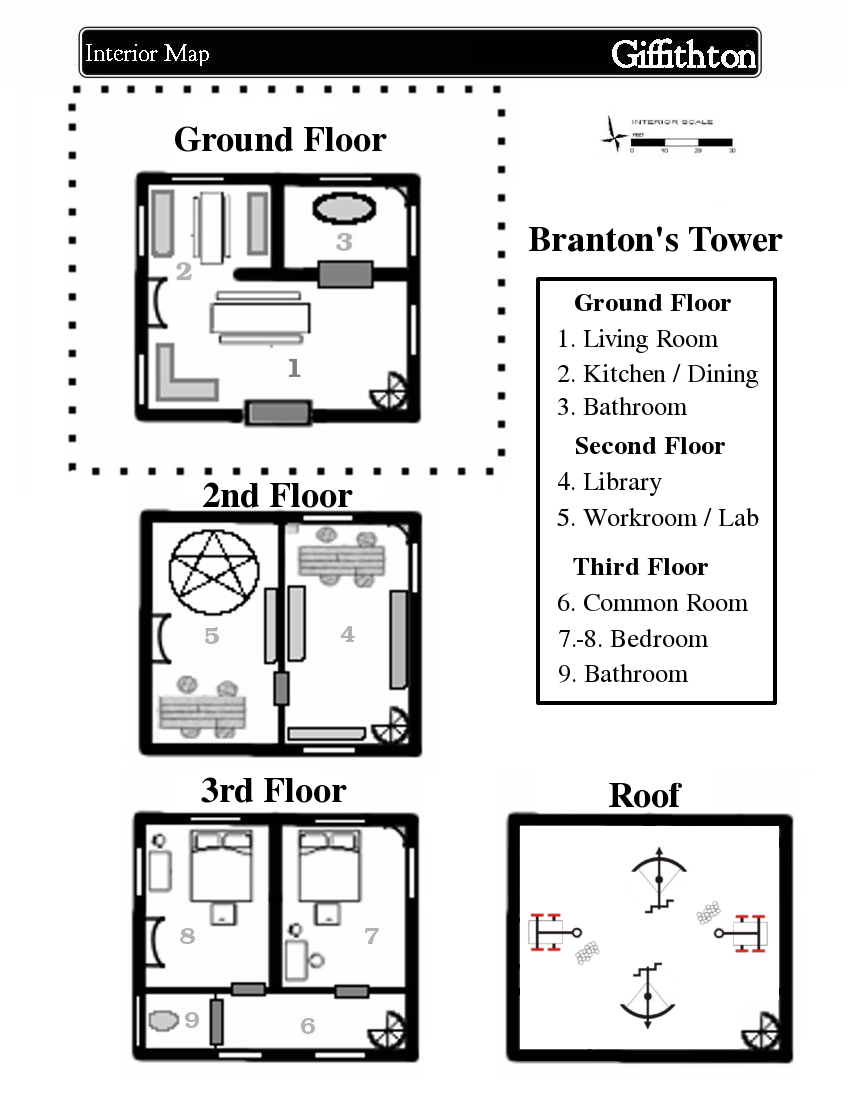 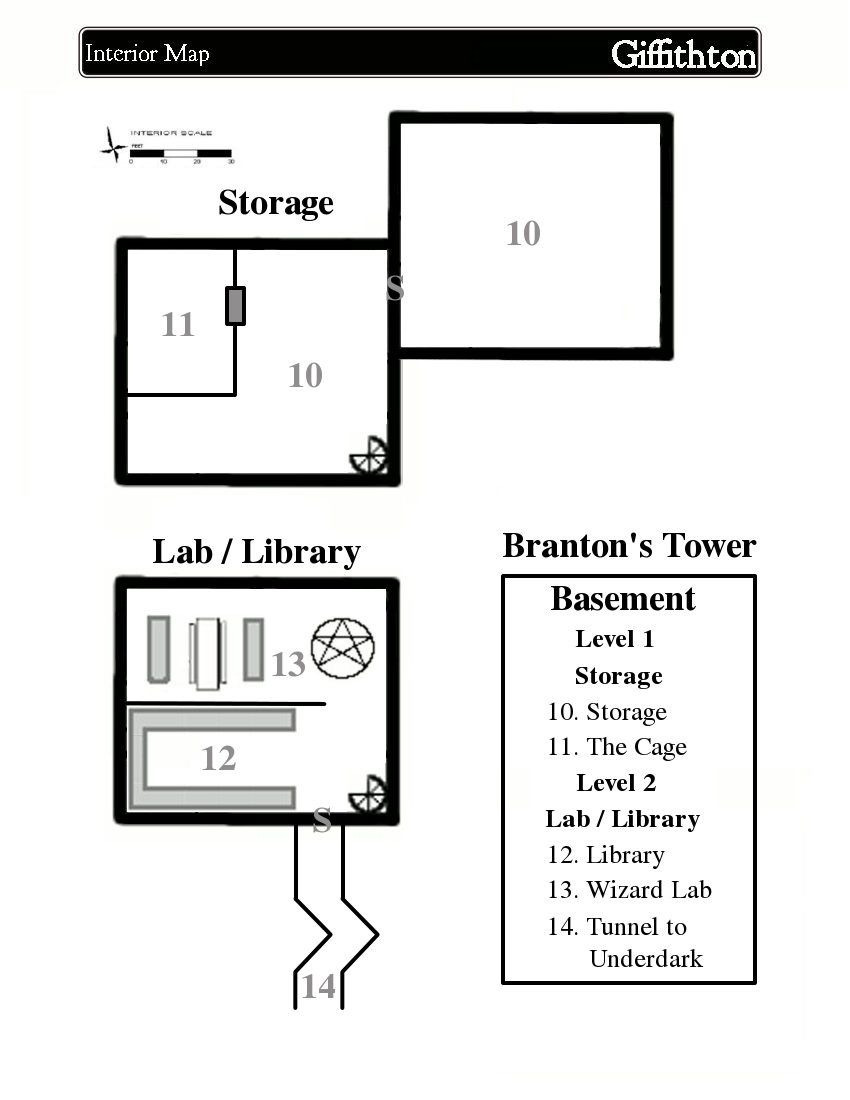