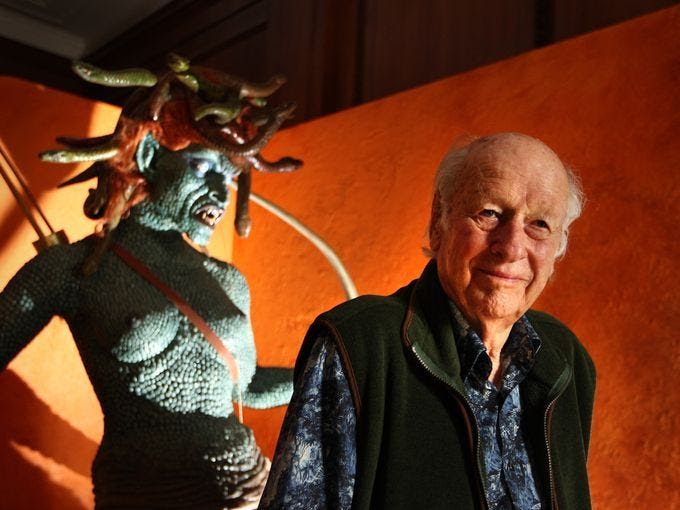 Special effects creator Ray Harryhausen poses with an enlarged model of Medusa from his 1981 film 'Clash Of The Titans' at the The Myths And Legends Exhibition at The London Film Museum in 2010. Harryhausen was considered the father of modern-day special effects. He died May 7, 2013, at the age of 92.

I can still vividly recall watching Jason and the Argonauts on the Saturday afternoon monsterfest. The film had Jason fighting against dangerous harpies, a multi-headed hydra and arguably Harryhausen's most famous creations, an animated army of skeleton warriors. The swordfight between them and live actors took Harryhausen more than four months to complete.

"Harryhausen's genius was in being able to bring his models alive," said a statement on the movie icon's Facebook page. "Whether they were prehistoric dinosaurs or mythological creatures, in Ray's hands they were no longer puppets but became instead characters in their own right, just as important as the actors they played against and in most cases even more so."
A "Ray Day'' is now planned for June 16, to coincide with a 50th-anniversary screening of Jason and the Argonauts at the BFI in London, said Mark Mawston, a friend of the Harryhausen family in London.
Posted by Al H. at 5:57 PM