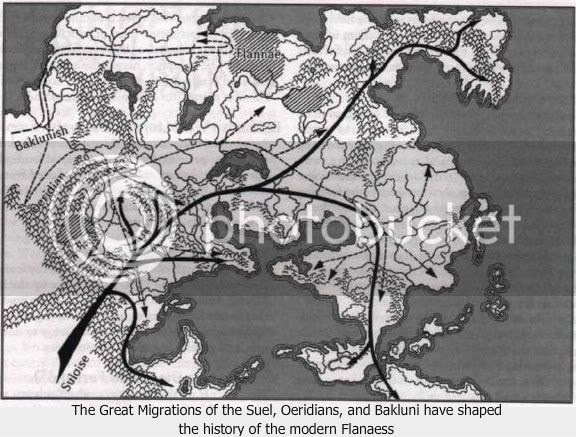 The commonly understood history of the Flanaess begins just over one thousand years ago, when the great conflict between the ancient Suloise and Baklunish empires forced massive migrations eastward across, around, and even under the western mountain ranges. This resulted in the mixture of races and cultures that defines the modern Flanaess.

Tales of the era before the migrations are fragmentary and poorly understood. Did monstrous creatures rule Oerik before the advent of humanity? Did the great races of humans, elves, dwarves, and the like arise by fiat of the gods or journey here from elsewhere? Did the elves raise humanity to civilization, or did humans achieve this on their own? Did the Flan once have their own empires and civilizations? Who built the oldest tombs in the Cairn Hills, the half-buried ruins in the Bright Desert, or the deserted stone cities in the Griff Mountains? Where were the fabled realms ruled by Johydee, the Wind Dukes of Aaqa, Vecna the Whispered One, the High Kings of the dwarves, or the elven King of Summer Stars? What became of the mysterious Isles of Woe, and who dwelled there? No one knows with any certainty.
Even histories of the early years of the migrations are unclear on many points. The Oeridian tribal realm of Thalland was so thoroughly absorbed by the kingdom of Aerdy that it survives only in name as the Thelly River. The ancient kingdom of Ahlissa, ruled by the Flan and easily conquered by Aerdy, is known today only for its founding wizard-queen, Ehlissa the Enchantress, and a magical nightingale she made. (The Flan here have almost vanished through intermarriage.) So it goes for much of recorded time.

What is presented here is a history of the land accepted by most learned authorities and understood by almost anyone with a rudimentary education.The current time is the Common Year (CY) 575, which is also 1219 OR (Oeridian Record), 6090 SD (Suloise Dating), 5037 OC (Olven Calendar), 3234 BH (Baklunish Hegira) and 2725 FT (Flan Tracking). 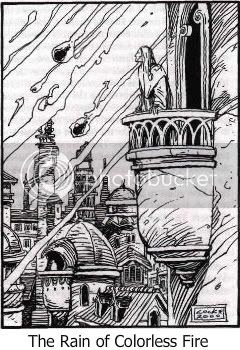 The root cause of the animosity between the Suel Imperium and the Baklunish Empire is lost in time, but the end result of their final war haunts even the modern day. After decades of conflict, the Suloise Mages of Power called down the Invoked Devastation upon the Baklunish, resulting in an apocalypse so complete that its true form remains unknown. Entire cities and countless people were purged from Oerth, leaving few signs of the great civilization that thrived from the Sulhaut Mountains to the Dramidj Ocean.

In retaliation, a cadre of Baklunish wizard-clerics, gathered in the great protective stone circles known as Tovag Baragu, brought the Rain of Colorless Fire upon their hated enemies. The skies above the Suel Imperium opened, and all beings and things beneath this shining rift in the heavens were burned into ash. So terribly did these attacks plague the world that they have come to be called the Twin Cataclysms, a term understood by nearly every resident of the Flanaess. The Dry Steppes and Sea of Dust are geographical reminders of this unbridled magical power, now lost to all people—perhaps for the better.

Thousands survived the early years of the Suel-Baklunish conflict by fleeing east over the Crystalmists. The Oeridians, a confederation of barbaric tribes in close proximity to the warring empires, took the wars (and attendant raids from orc and goblin mercenaries in the employ of both sides) as a sign to migrate eastward in search of their ultimate destiny. They were the first large group to enter the lands of the Flan, which they termed the Flanaess.

Suloise refugees soon followed, sometimes working with the Oeridians to pacify the land, but more often warring with them over which race would dominate it. For over two centuries, Suel and Oeridian fought for control of the region from the Crystalmists to the Solnor Coast. Many Suloise were debased and wicked, and they lost most of these battles and were pushed to the periphery of the Flanaess.


Though some Baklunish folk migrated eastward, many more fled north toward the Yatil Mountains, or to the shores of the Dramidj Ocean, where their ancient cultures flourish to this day. The very nonhuman mercenaries the Oeridians had sought to avoid found themselves swept up by these migrations. Many of the foul creatures that now plague the Flanaess arrived following the Oeridians and Suel. These renegade mercenaries trailed after human migrants in search of plunder, food, and slaves. 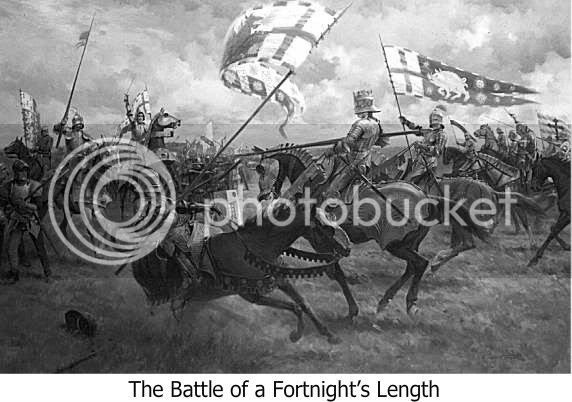 The most successful union of Suel and Oeridian came in the Sheldomar Valley, where Keoland was founded eighty years after the Twin Cataclysms. The Suel Houses of Rhola and Neheli joined with Oeridian tribes on the banks of the Sheldomar and pledged themselves to mutual protection and dominion of the western Flanaess, an agreement that set the course of history for the region for the next nine centuries. Of all the new realms formed during those tumultuous days, only Keoland remains.


Farther east, the most powerful of all Oeridian tribes, the Aerdi, reached the Flanmi River. From there they spread outward again, conquering indigenous peoples and fellow migrants alike. In time, the kingdom of Aerdy ruled the whole of the eastern Flanaess and moved its borders westward. One hundred and ten years after the defeat of the last meaningful threat to Aerdi sovereignty, at the Battle of a Fortnight’s Length, the leader of Aerdy was crowned as overking of the Great Kingdom. Overking Nasran also marked the birth of a new calendar, and with the Declaration of Universal Peace, the sun arose in the east on the first day of the first Common Year. The writ of imperial Aerdy eventually encompassed holdings as far west as the Yatils, controlling the southern Nyr Dyv with a small garrison at an insignificant trading post known as Greyhawk.

From 213 CY on, the Aerdi overkings grew lax, caring more for local prestige and wealth than for the affairs of their vassals in distant lands. This period was called the Age of Great Sorrow. As each sovereign passed, he was replaced with a more dimwitted and less competent successor, until the outer dependencies of Aerdy declared their independence. The viceroyalty of Ferrond led the way, becoming the kingdom of Furyondy. Other regions also broke away from the ineffectual government of the overking over time, creating their own governments after achieving success in their wars of rebellion.

By 356 CY, the ruling dynasty of Aerdy, the Celestial House of Rax, had grown especially decadent. In response, the western province of Nyrond declared itself free of the Great Kingdom and elected one of its nobles as king of an independent domain. Armies gathered from all loyal provinces of Aerdy to suppress this brazen act. At this time, however, barbarians from the Thillonrian Peninsula raided the Great Kingdom’s North Province, forcing the overking to divert troops from the western front. Nyrond easily survived and thrived.

The Kingdom of Keoland awoke from a long slumber in the third century, expanding to dominate its neighbors. This short-lived Keoish empire lasted almost two centuries before far-flung wars and internal strife laid it low. The outer dependencies declared their autonomy, and Keoland resumed its peaceful isolation

The darkest chapter in the history of Aerdy began in 437 CY. In this year, the upstart House Naelax murdered the Rax overking, inaugurating a series of gruesome civil wars called the Turmoil Between Crowns. Within a decade, Ivid I of Naelax was recognized as the undisputed overking of all Aerdy. As Ivid was rumored to be in league with powerful evil Outsiders, the Malachite Throne of the Great Kingdom became known as the Fiend-Seeing Throne, and the once mighty and upright empire became a bastion of evil and cruelty. 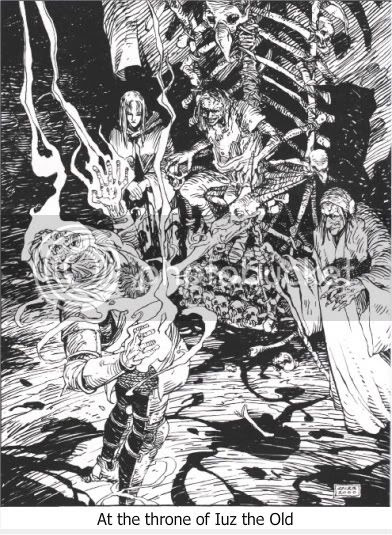 The lands of the Flanaess soon became acquainted with an altogether less subtle form of evil with the rise of Iuz, in the Northern Reaches loosely aligned with Furyondy. In 479 CY, a minor despot in the Howling Hills left his domain to his “son,” a being known as Iuz. Within a handful of years, Iuz had conquered his neighbors, setting up a small realm for himself. Tales told by refugees entering Furyondy spoke of unmitigated evil: Iuz was building a road of human skulls from the Howling Hills to his capital, Dorakaa. Worse, divinations and rumors marked Iuz as the offspring of an unholy union between necromancer and demon; he was seen to be a half-fiend towering 7 feet in height, driven by a thirst for blood, destruction, and conquest.

Political struggles within Furyondy prevented the king from acting decisively in this period, when the evil of Iuz might have been permanently checked. Instead, the cambion lord flourished until 505 CY, when he appeared to vanish from Oerth. In truth, Iuz was imprisoned beneath Castle Greyhawk by the Mad Archmage Zagig Yragerne, former lord mayor of Greyhawk. In Iuz’s absence, orc tribes and disloyal former subjects squabbled for control of his lands, allowing the forces of weal to rest for a time.

Three developments kept Furyondy and its allies from complacency. First, part of Iuz’s leaderless realm soon broke away to be ruled by a nearly equal evil, the Horned Society.

Second, the notorious Horde of Elemental Evil arose, a collection of cultists and villains headquartered at a temple south of the town of Verbobonc. The Horde was the puppet of Zuggtmoy, Iuz’s abyssal consort, who instructed it in bizarre teachings at the behest of her absent lover. The Horde’s banditry was finally vanquished in 569 CY at the Battle of Emridy Meadows, where Prince Thrommel of Furyondy led forces from Furyondy, Veluna, Verbobonc, and other realms in victory and the destruction of the temple.

Third, faithful orc and human servants of Iuz became zealots dedicated to their absent lord. In time, the leaders of these cults devoted to Iuz displayed magical power, igniting Furyondy’s worst fears. In 570 CY, a meddlesome warrior-adventurer named Lord Robilar freed Iuz from his imprisonment. Iuz returned to his lands more powerful and wicked than ever before, with an unholy priesthood leading his forces in his unholy name.
Posted by Al H. at 8:09 AM