Located at the confluence of the Jewel River, Pembrose, with its 600+ residents, is by far the largest settlement in the Jewel Valley. The fertile riverbed provides excellent farmland; the Gnarley Forest supplies lumber; and the river, along with the adjacent road, provide ample means of shipping goods in and out of the valley. The village borders the river , and there are several docks and warehouses along its banks. A large central market where commoners and adventurers alike can find most anything that they need dominates Pembrose. Lord Kyle’s manor sits on the village’s northwestern perimeter, surrounded by farmland and his private hunting grounds. 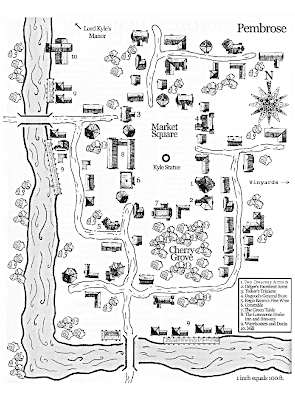 
Situated a quarter mile northwest of Pembrose, this twelve room, three story estate is surrounded by one hundred acres of farmland, private hunting grounds, and an orange grove.


The heart of Pembrose is the Town Square and its bustling market, The streets are cobbled and kept clean. A 10 foot high statue of Lord Kyle’s father, Jeremy Kyle, stands in the middle of the square. All the village merchants surround the Square, joined everyday by peddlers and farmers who arrive early in the morning with their carts and wagons to hawk their wares. Anything in the PHB that costs less than 200 gp can be purchased here in the market.


Culwert a venerable dwarf and brother of Odger, is the valley’s finest armorer, His prices are reasonable, and he is capable of crafting masterpieces. Culwert is not fond of talk and works ten hours a day, after which he can be found downing pint after pint at the Lonesome Drake Inn and Brewery. He has dreams of finding the final resting place of his brother, an adventurer who died in the Underdark, or so he believes.
This is currently being transitioned over to Torbin and Korbin, the dwarven brothers that the party freed from the Adlerweg Keep.
A new sign can be seen in the window proclaiming;
Two Dwarves Weapons and Armor – swords and armor for the heavy hitter. Weenie arms need not apply. Remember Hero Damosels love a real man with a really big sword.


Culwert’s younger brother Odger runs this establishment. Odger is chattier than his brother, and can be prodded to divulge all sorts of rumors from the valley.


Tinker, a red bearded gnome, has run his pawnshop in Pembrose for twenty-five years. Before he opened the shop he was an adventurer himself, but he quit that dangerous profession when he realized he enjoyed more haggling with merchants over the price of the booty than he did procuring it. The most he can pay for any item is 1,000 gp, and then only once.
Most of what Tinker has for sale are jewels, baubles, and knick-knacks.
Tinker knows Tina, the sorcerer and potion maker in Bostwick, and despises her. He calls her The Witch. The reason for the feud goes back many years and involves a Wand of Magic Missiles that, for one reason or another, both believed belonged to them. Tina ended up with the wand (see Bostwick)


The PCs can buy all their sundry adventuring supplies here for reasonable prices. Twyla Osgood the diminutive (4ft, 10in.) gray-haired proprietor is a long time resident of the valley and good friend of Jeffar, the cleric of Pholtus who lives in Bostwick.


Pembrose Red, a light fruity table wine , is bottled, sold, and distributed from this large two-story building. Regis and his wife Winifred live above their shop in a comfortable, six-room home. In fact, after Lord Kyle, the Baums are the most prosperous family in the village. Dylan Boxtoggar is the vintner for the wine harvested from the nearby hills.


This is Pembrose’s other tavern, aside from the Lonesome Drake. Starkly furnished with long tables (which, yes, are painted green) and rough wooden benches, the Table serves mutton and potato stew for lunch and breakfast seven days a week (2 sp, including tankard of ale). It is a simple one-story building run by a humorless halfling named Croonles. There are no rooms but the PCs can sleep on the floor of the common room for 5 sp.


The Lonesome Drake Inn and Brewery


This is the largest, cleanest, most reputable inn and eating establishment in the valley. Boris Stenker, his wife Irma, and their two sons, William and Tommy (ages 12 and 11) run the Drake for the last two years. Irma cooks the meals, Boris runs the bar and is responsible for the lodging, William looks after the stables, and Tommy-along with Brynna who’s worked at the bar for the last 15 years-helps serve the food.
Nearly any member of the village can be found at the Drake at one time or other. In times of strife it serves as a public gathering place where villagers can sort out their troubles.
Posted by Al H. at 5:26 PM