The Free City of Greyhawk is known as "The Gem of the Flanaess."  As of c550 the city is prospering, though the grey hawks indigenous to the city have disappeared, replaced by ravens.  Many secrets are held within the city.

Greyhawk, named for the small grey hawks which populate the region, was originally a trading outpost on the Selintan River specializing in local wood and woven garments. In time the town developed strong textile and meat-packing industries. Eventually, Greyhawk came to be ruled by a warlord, who took the title "Lansgraf of the Selintan". His son was then married to the Gynarch of Hardby's daughter. The nuptials formalized a political alliance that served as the basis for rule over the Lanstadt of Selintan, an area that eventually became known as the Domain of Greyhawk.
In 4 CY, Greyhawk came under the domination of the Great Kingdom of Aerdy and remained so while strong Overkings ruled from the Malachite Throne in Rauxes. By the third century CY, the Great Kingdom's influence over the city began to wane as the Overkings fell into evil ways and their hold on distant provinces became increasingly tenuous.

Rise to prominence, decline and recovery

Circa 310 CY, the mage Zagig Yragerne emerged from the Wild Coast and bribed his way into a seat on the Directing Oligarchy. Soon after, the Oligarchs elected Zagig Lord Mayor.
Greyhawk subsequently rose in fame and prominence under the leadership of Lord Mayor Zagig. He instituted legal reform, developed a new currency, fortified the walls, founded the city's first university and embarked on a major building program. Most notably, he directed the construction of nearby Castle Greyhawk.
Although Zagig, later known as Zagyg, became increasingly erratic over time, his rule is generally considered to be the most effective in the Free City's history and brought widespread prosperity to the region. Much to the annoyance of Dyvers and other rival cities, Zagig proclaimed Greyhawk to be the "Gem of the Flanaess," and did much to ensure this moniker was justified. Unfortunately, the "Mad Archmage" suddenly disappeared in 421 CY, leaving no clues regarding his whereabouts, and no heir to inherit the title of Lansgraf.
In 498 CY, after decades of Zagig's absence, the Lanstadt was therefore abolished, the title of Lansgraf permanently retired, and the Free City's Directing Oligarchy assumed political authority. The new Lord Mayor Paerinn officially proclaimed Greyhawk a free city, though it had been effectively independent of the Great Kingdom's rule for over a century.
Soon thereafter, the city lost its claim over Hardby and the Wild Coast, as the leading women of Hardby broke from Greyhawk and established the ruling office of Despotrix. This loss of lands sent the Free City into economic decline, a situation that persisted for several decades. Fortunately, the discovery of treasure in the dungeons beneath Castle Greyhawk and other nearby locales set off a gold rush of sorts, and Greyhawk's economic fortunes recovered substantially in the latter half of the sixth century.

The Free City of Greyhawk is located centrally in the Flanaess, which is the easternmost part of the continent of Oerik on the world of Oerth. The city controls a large swath of land along the Selintan River from the Nyr Dyv south to Woolly Bay most of the Cairn Hills, parts of the Gnarley Forest, the northern Wild Coast, and parts of the Abbor-Alz. The entire region is officially known as the Domain of Greyhawk. The Domain is bordered on the east by the Abbor-Alz and its western border lies within the Gnarley Forest. The area south of Greyhawk City along the Selintan is known as the Plain of Greyhawk.

Several settlements fall within the Domain of Greyhawk:

Executive branch: Greyhawk's Directing Oligarchy elects one of its own to as Lord Mayor, who serves as the head of state in addition to his directorial duties. The current Lord Mayor, Nerof Gasgal, has held office since 550 CY. The Lord Mayor heads both the Directing Oligarchy and the Council of Mayors and Manorial Lords. The chief of state also officially heads the military, though actual command is most often left to the Captain General of the Watch.
Legislative branch: The Free City of Greyhawk is ruled by the Directing Oligarchy, an executive council of twelve to eighteen members representing the City's major professional guilds and the military. In some cases, the Oligarchy may include important wizards or clerics. New Directors are chosen by current council members when a vacancy must be filled.
The Greyhawk Council of Mayors and Manorial Lords is an annual assemblage of leaders from the various baronies and towns in Greyhawk Domain. In theory, this gathering allows citizens of the Domain to have a voice in the governance of the region, but in practice this Council has little real authority.
Judicial branch:Major legal matters in the Free City of Greyhawk are adjudicated by a Judge of Greyhawk, one of eight such officials appointed by the Directing Oligarchy. One of these eight is chosen to serve as Chief judge of Greyhawk, a position currently held by Sir Anton Palmirian who also sits on the Directing Oligarchy and oversees the Guild of Lawyers and Scribes. In cases of great import, three Judges of Greyhawk may preside. Appeals of major cases are always heard by a panel of three Judges of Greyhawk, though the Lord Mayor sometimes sits in place of one of the Judges.

Several roads link the settlements of the Domain of Greyhawk, including the High Road (from Greyhawk City to Elmshire), the Urnst Trail (from the High Road to the Duchy of Urnst), the Western Road (from Ford Keep on the Selintan to Dyvers), and the River Road (south from Greyhawk City along the Selintan).
Much river traffic takes place along the Selintan River, which can accommodate all but the largest sea-going vessels from the Nyr Dyv and Woolly Bay. Smaller vessels ply the Ery and Neen rivers.

Based on Joe Bloch's hand drawn maps, which were in turn based on Gary Gygax's sketch map in the beginning of "City of Hawks". This map is also designed to use the keys in the TSR blue boxed City of Greyhawk set.


Clicking on the city will bring up a much larger image.
Edit: Current state of the map; 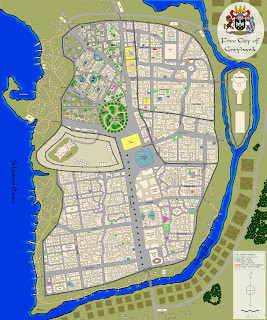 See part 2 of this article as well as the Greyhawk undercity map.
Posted by Al H. at 9:20 PM