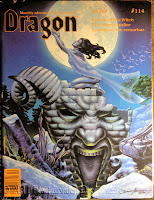 In case you haven't caught the buzz going around - you can now download and read most every issue of Dragon magazine, courtesy of the Internet Archive. Check the archive out for The Dragon yourself.

They have a lot of back issues, but it's especially timely now that Wizards of the Coast have started offering up older editions of D&D to download. There's so much inspiration between these pages that you could spend days just reading them.

[edit: as you may/or may not have noticed The Dragon and Polyhedron links no longer work]

And the good news continues because they also have available;


And just for fun there's;
Now to be honest folks I'm not sure how they have some of the later issues of "Dragon" up legally because of copyright issues, but I'm just pointing you to them. I'd suggest you look at them while the looking is good.
Posted by Al H. at 8:31 AM