The pleasant and seemingly peaceful village of Hommlet turned out to be filled with intrigue, with agents of Chaotic Evil hiding within the hamlet. The supposedly deserted and ruined moat house nearby held a new champion of the nearby Temple of Elemental Evil. 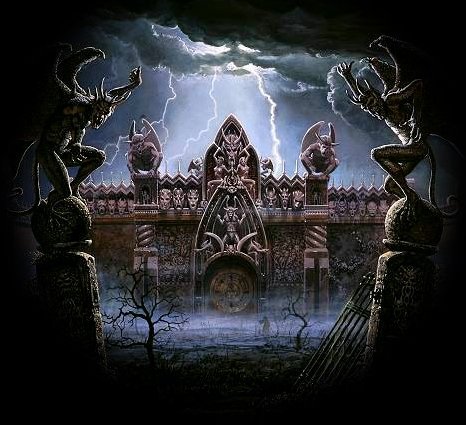 All of this brought danger and difficulty to the members of your group, but it also offered adventure, experience, and wealth. You have either slain or driven off the evil men and creatures, and the able guardians of Hommlet— Jaroo, Terjon, Burne , Rufus , and the rest of the sturdy militiamen — can surely see to it that their area remains clean of the taint of Evil hereafter. Having accomplished most of your goals, you must now look elsewhere for yet greater challenges (and commensurate rewards). If agents of the Temple were still active in Hommlet, then there must certainly be work for you at that fountainhead of wickedness. Just a half-day’s journey afoot (only about two hours’ ride), east along the High Road, lies the disreputable community of Nulb, and the Temple hidden in the hills nearby. This vile place spawned much suffering, ruin and death before the hosts of Good brought it low and bound its power. It is evident that the place was wounded but not slain, for dark things crept into Hommlet under direction of someone or some thing still lurking in the shunned edifice of Evil. The upper works of the Temple were thrown down and destroyed in the final siege of the war against its hordes. Because of its great power and evil, however, the conquerors did not actually raze the Temple proper, instead sealing its great doors and placing mighty wards of all sorts upon the place and the black labyrinth beneath. Even as great a force as overthrew the Temple could not cleanly deal with what lurked below. Since that great battle, the Temple area has been shunned, its ruins deserted. The nearby village of Nulb has returned to a semblance of normal activity — questionable at best, for the place has always been rumored to house thieves, brigands, smugglers and pirates. But as Nulb stinks of garbage and filth, the Temple area reeks of the foul corruption and pervading Evil from whence it was spawned. No wonder that both places have again been left to their own devices. When the Temple of Elemental Evil flourished, earthquakes, storms of all sorts, great fires, and flash floods struck areas nearby with seeming capriciousness. All that ceased when the Temple was assaulted and sealed. You have been advised of all this, and urged to go elsewhere to seek your fame and fortunes. The unease which prevails upon those merely passing near the ruins shows that some wickedness still haunts the place. There are many bad folk in Nulb, and still greater perils amidst the fallen Temple. Yet the lure of such adventure beckons to you, drawing your party as surely as a lodestone draws iron. Warnings against loss of life — or even worse fates — cannot counter the irresistable pull of treasures secreted deep underground, of monsters still unbeaten, of mysteries to be unraveled. There are whispers of occult places beneath the interdicted Temple, where mighty Evil is yet wrought and noble folk are imprisoned. With care and cunning, luck and great deeds, caution mixed with boldness and daring, you and your associates can win through to achieve exploits of the stuff of legend! The journey of a hundred leagues begins with the first pace, and the time for your sojourn has come. How you and your fellow adventurers plan to overcome the perils of the Temple is a matter that you must decide for yourselves. Is it best to reconnoiter from Hommlet? Base your activities from the village of Nulb? Try to make a secure wilderness camp somewhere near the ruin? Or perhaps lodge somewhere within the foreboding Temple itself? The decision is now. It is certain that both vast treasure and horrible death await, so you must gain the one while cheating the other. Fortune and the gods must smile upon such an undertaking.

For many years, a cult of Chaotic Evil flourished somewhere on the shores of the Nyr Dyv. Although the location of their Temple is lost, these facts regarding it and its followers are known. The cult was based on the premise that the elemental forces of the universe are Chaotic and opposed to mankind, and are thus (from a humanocentric viewpoint) Evil. The Temple of the cult sought to destroy all works of Good and to disrupt order. Its members were thieves, assassins, brigands, and the like. Fire was regarded as the first elemental evil, and its penchant for Chaos fitted the premise of the cult. Water was likewise worshipped as an even more powerful force of Chaotic Evil, in the form of floods, storms, and raging seas beating upon the land and ocean vessels. The epitome of Chaotic Evil, however, was regarded as a combination of air and earth, represented by blackness and corresponding with the demonic Abyss. This combination was regarded as a complete negation of matter. The cult grew powerful and rich, attracting followers of the worst sort and offering them safety within the walls of the Temple stronghold. From this fortress would the followers ride to rob, pillage, and lay waste the lands about, tithing the cult from the spoils of the carnage. Captives from those raids were brought back to the Temple to serve as human sacrifices (children to the fire, men to the water, and women to the blackest Evil) or to slave their lives away in bondage. Besides the extensive upper works of the Temple, a deep labyrinth beneath the place was constructed, but virtually nothing is known about these dungeons except that they were inhabited by a plethora of creatures serving Chaos and Evil. It is rumored that a demon took up abode in the deepest level, to better receive the sacrifices to it. Eventually the neighbors of the Temple grew tired of these depredations. All Good, both Lawful and Chaotic, banded together to form a mighty host. Their army marched to the Temple, fighting two battles along the way. The first was conclusive, thought the forces of Good who held the field afterward, so they gained the reputation of victory, and their ranks swelled with local men. The second battle saw a great slaughter of kobolds, goblins, ogres, hobgoblins, evil men, and the like. The Temple was thereafter besieged, fell, and its inhabitants put to the sword. It is reported by some sources that the Temple and its precincts resisted complete destruction, but the majority state that the whole was razed so that the cult could never emerge again nor could any find where it once flourished.


Ruins leading to the Temple

The road leading from Nulb to the Temple is rutted and spotted with rank weeds—thistles, burrs, thorns, nettles, etc. Some foot and animal traffic has been using the track, but it is not a busy
thoroughfare. (Most traffic between these points avoids using the road, so as not to leave a discernible path. ) As you approach the Temple area, the vegetation is disconcerting—dead trees with a skeletal appearance, scrub growth twisted and unnaturally colored, all unhealthy and sickly looking or exceptionally robust and disgusting. The ruins of the Temple’s outer works appear as dark and overgrown mounds of gray rubble and blackish weeds. Skulls and bones of humans and humanoids gleam white here and there amidst the weeds. A grove of some oddly stunted and unhealthy looking usk trees still grows along the northern end of the former Temple compound, and a stump of a tower juts up from the northeast corner of the shattered wall. The leprous gray Temple, however, stands intact, its arched buttresses somehow obscene with their growth of climbing vegetation. Everything surrounding the place is disgusting. The myriad leering faces and twisting, contorted forms writhing and posturing on every face of the Temple seem to jape at the obscenities they depict. The growth in the compound is rank and noisome. Thorns clutch, burrs stick, and crushed stems either emit foul stench or raise angry weals on exposed flesh. Worst of all, however, is the pervading fear which seems to hang over the whole area — a smothering, clinging, almost tangible cloud of vileness and horror. Sounds seem distorted, either muffled and shrill or unnaturally loud and grating. Your eyes play tricks. You see darting movements out of the corner of your eye, just at the edge of vision; but when you shift your gaze towards such, of course, there is nothing there at all. You cannot help but wonder who or what made the maze of narrow paths through the weedy courtyard. What sort of thing would wander here and there around the ghastly edifice of Evil without shrieking and gibbering and going completely mad? Yet the usual mundane sounds of your travel are accompanied only by the chorus of the winds, moaning through hundreds of Temple apertures built to sing like doomed souls given over to the tender mercies of demonkind, echoed by macabre croaks from the scattered flapping, hopping, leering ravens. There is no doubt; you have come to a place of ineffable Evil. Still, it is most certainly a place for high adventure and untold treasures. It is time to ready spells, draw weapons, check equipment, and set forth into the maze of peril that awaits you.
Posted by Al H. at 4:30 PM