The village of Nulb is filthy, ramshackle,and still fairly active despite the destruction of the Temple. The buildings are of turf, mud brick, crudely hewn logs, and old timbers from boats. One or two have stone foundations and proper boards, but even these are in need of repair. The inhabitants of the village are boatmen, fishers, herdsmen, farmers, and the like. It is apparent that no one manages to make much of a living in Nulb, and as it is such a poor place, it is generally ignored by lords and bandits alike.

A small amount of commerce moves along the Low Road, as well as into Nulb from the Velverdyva, as Imeryds Run is wide and deep enough for the small river vessels to use for offloading cargo and likewise embarking it from Nulb, north of the ford there. Only four points in the entire village are noteworthy.

This place is one of the more substantial buildings in Nulb. It has a foundation of field stone and walls of sawn timber, but is nonetheless a scurvy place. Its main trade is in its tavern room, though occasional travelers stop to spend the night. Rich guests have been known to disappear mysteriously. The hostler is a burly fellow with a scarred, pockmarked visage, one eye covered by a patch. The barkeep is lanky and of greasy appearance, but quite tall. Two slovenly wenches and two manservants of surly mein hover about the place.

The smith is a very powerful man, with a bushy beard and large hands forever working some piece of iron. He is assisted by a dull-witted stable 'boy' and a rat-faced young apprentice. Though the smith's main skill is shoeing horses and similar work, he can mend armor and do minor weapons
work, and so is kept quite busy. He is usually seen drinking quietly (though he brawls on occasion) at the Waterside Tavern.

This dilapidated frame building is well known in the village as the place to go for all sorts of herbs, medicines, and possibly even special draughts of one sort or another. Mother Screng is old and bent, with scraggly gray locks sticking out from beneath the aged shawl she wears all year 'round. Her daughter appears quite old herself, so Mother Screng must be venerable. This daughter, Hruda by name, is quite ugly, and it is no wonder that she is an old maid, for her personality matches her looks and her tongue is sharp.
Inside the shop are counters and shelves filled with jars, flasks, bottles, boxes, and small drawers. These are stuffed with herbs and like stuff, and various infusions and decoctions made from such. Bunches of vegetation of various sorts hang from the rafters or are tossed onto counter tops to dry. The shop has almost every known herb and spice.

This large old warehouse building houses a small tavern in a back corner. The remainder of the place is both a warehouse and general store. Various items of soft and hard goods are offered here, as well as general provisions and fresh seafood. The Boatmens' Tavern is as cheap as the bar at the Waterside Hostel—and the place is even dirtier and rougher. The room can hold about 30 customers, and any time after 8: 00 AM, village folk and as many rivermen from elsewhere can be found here, tipping mugs of beer, ale, or wine. 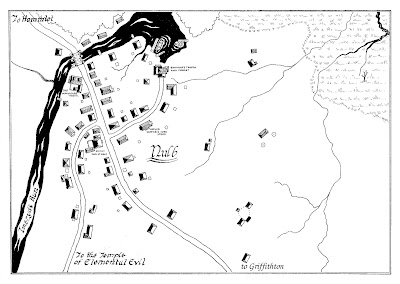